Revealing ‘hidden’ phases of matter through the power of light 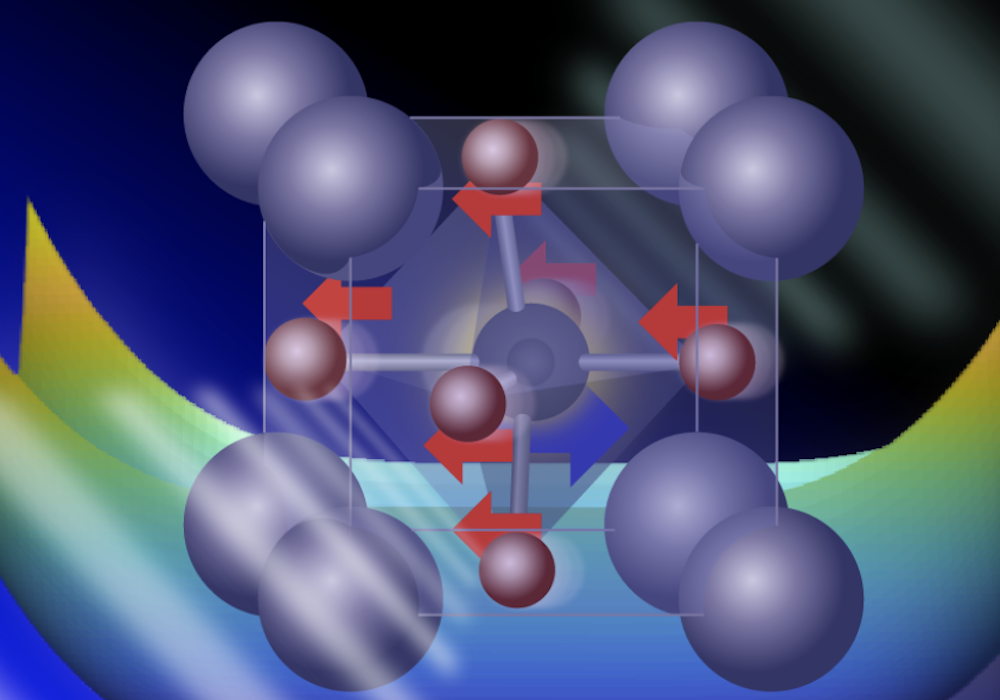 Most people think of water as existing in only one of three phases: solid ice, liquid water, or gas vapor. But matter can exist in many different phases—ice, for example, has more than ten known phases, or ways that its atoms can be spatially arranged. The widespread use of piezoelectric materials, such as microphones and ultrasound, is possible thanks to a fundamental understanding of how an external force, like pressure, temperature, or electricity, can lead to phase transitions that imbue materials with new properties.

A new study finds that a metal oxide has a “hidden” phase, one that gives the material new, ferroelectric properties, the ability to separate positive and negative charges, when it is activated by extremely fast pulses of light. The research was led by MIT researchers Keith A. Nelson, Xian Li, and Edoardo Baldini, in collaboration with Andrew M. Rappe and graduate students Tian Qiu and Jiahao Zhang. The findings were published in Science.

Their work opens the door to creating materials where one can turn on and off properties in a trillionth of a second with the flick of a switch, now with much better control. In addition to changing electric potential, this approach could be used to change other aspects of existing materials—turning an insulator into a metal or flipping its magnetic polarity, for example. “It’s opening a new horizon for rapid functional material reconfiguration,” says Rappe.

The group studied strontium titanate, a paraelectric material used in optical instruments, capacitors, and resistors. Strontium titanate has a symmetric and nonpolar crystal structure that can be “pushed” into a phase with a polar, tetragonal structure with a pair of oppositely charged ions along its long axis. Nelson and Rappe’s previous collaboration provided the theoretical basis for this new study, which relied on Nelson’s experience using light to induce phase transitions in solid materials, along with Rappe’s knowledge in developing atomic-level computer models. “[Nelson is] the experimentalist, and we’re the theorists,” says Rappe. “He can report what he thinks is happening based on spectra, but the interpretation is speculative until we provide a strong physical understanding of what happened.”

With recent improvements in technology, and additional knowledge gained from working with terahertz frequencies, the two chemists set out to see if their theory, now more than one decade old, held true. Rappe’s challenge was to complement Nelson’s experiments with an accurate computer-generated version of strontium titanate, with every single atom tracked and represented, that responds to light in the same manner as the material being tested in the lab. They found that when strontium titanate is excited with light, the ions are pulled in different directions, with positively charged ions moving in one direction and negatively charged ions in the other. Then, instead of the ions immediately falling back into place, the way a pendulum would after it’s been pushed, vibrational movements induced in the other atoms prevent the ions from swinging back immediately. It is as if the pendulum, at the moment that it reaches the maximum height of its oscillation, is diverted slightly off course where a small notch holds it in place away from its initial position.

Thanks to their strong history of collaboration, Nelson and Rappe were able to go back and forth from the theoretical simulations to the experiments, and vice versa, until they found experimental evidence that showed that their theory held true. “It’s been a really awesome collaboration,” says Nelson. “And it illustrates how ideas can simmer and then return in full force after more than 10 years.”

The two chemists will collaborate with engineers on future applications-driven research, such as creating new materials that have hidden phases, changing light-pulse protocols to create longer lasting phases, and seeing how this approach works for nanomaterials. For now, both researchers are excited about their results and where this fundamental breakthrough could lead to in the future. “It’s the dream of every scientist—to hatch an idea together with a friend, to map out the consequence of that idea, then to have a chance to translate it into something in the lab, it’s extremely gratifying. It makes us think we’re on the right track towards the future,” says Rappe.

This research was supported by Department of Energy Office of Basic Energy Sciences grants DE-SC0019126 and DE-FG02-07ER46431 and Swiss National Science Foundation fellowship P2ELP2-172290. Computational support was provided by the National Energy Research Scientific Computing Center of the Department of Energy.