Highlight on more than 5 international news outlets. From the website: 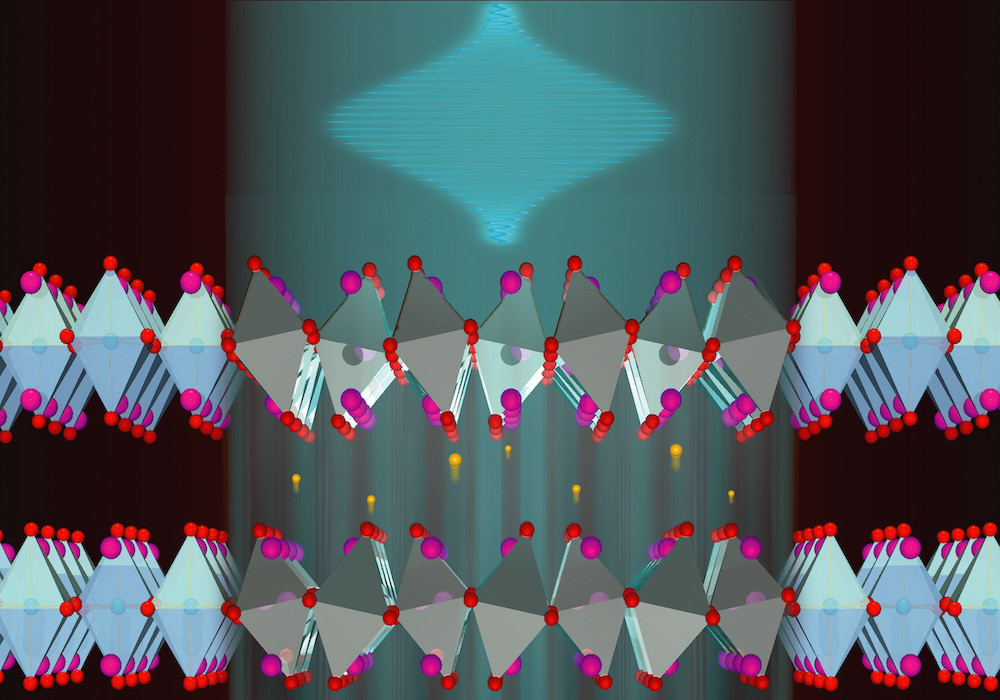 An international team of researchers from Switzerland, Germany, the USA and Great Britain has uncovered an anomalous metallic behavior in an otherwise insulating ceramic material. The team used ultrashort light pulses with a wide range of colors to watch what happens when the insulating quasi two-dimensional material La2CuO4 (LCO) becomes a three-dimensional metal through laser irradiation. Surprisingly, the researchers found that specific vibrations of the crystal lattice are involved in this metallization process. A careful computational investigation revealed that the same vibrations that show up in this ultrafast movie can destabilize the insulating behavior all by themselves. These results are now published in the Proceedings of the National Academy of Sciences (PNAS) and could help devise design criteria for optimizing energy-saving superconductors at record temperatures.

The condensed-matter physics world was shaken up when high-temperature superconductivity was reported in a copper oxide material in 1986 by Alex Müller and Georg Bednorz. Their discovery not only led to an immediate Nobel Prize in 1987, it also created the “Woodstock of Physics” at the following American Physical Society’s March Meeting, which in turn made it onto the New York Times front page. This was the start of the “fever of high Tcs”, a world-wide scientific undertaking towards achieving room temperature superconductivity. Some thirty years later and counting, the copper oxides keep posing puzzles to physicists. A universally agreed-upon explanation of their electronic properties has not yet been reached.

Conventional superconductors, like mercury or aluminum, are well understood. In those, electrons that repel each other because they carry the same negative electric charges, are bound together by deformations of the crystal lattice, formed by positively charged ions. An intuitive way to understand why this happens is the soft-mattress analogy: two people sharing the same bed inadvertently end up close by one another because their weight deforms the mattress. In conventional materials, such binding of electrons can convert a normal metal with ohmic resistance into a superconductor in which all electrons form one quantum soup that zips through a wire without any losses. However, this superconducting state can only occur if the materials are cooled with liquid helium to near absolute zero temperature, a cost-expensive process that limits the scope of consumer applications.

In high-temperature superconductors, almost everything is different. Those with the highest superconducting transition temperatures require only liquid nitrogen to be sufficiently cold to superconduct. But when they are not that cold, they are poor conductors rather than good metals. And in the parent state, they are even good insulators with magnetic behavior – things that traditional wisdom told scientists would be bad for superconductivity. On top of that, the crystal lattice was long thought to not be involved in the superconducting mechanism. Rather, strong Coulomb repulsion leading to electronic localization – think morning traffic jams at rush hour – in Mott insulators was thought to play the key role.

The new results by the team involving research groups at the École Polytechnique Fédérale de Lausanne (EPFL), the Max Planck Institute for the Structure and Dynamics of Matter (MPSD Hamburg), and King’s College London (KCL), paint a slightly different picture. In LCO, one of the insulating parent compounds to high-temperature superconductors, certain lattice vibrations not only accompany the metallic behavior induced by laser pulses – the  vibrations may even help in the metallization process.

The study’s first author, experimentalist Edoardo Baldini, who conducted the experiment as a PhD student in Fabrizio Carbone’s group at the EPFL and is now a postdoctoral researcher at the Massachusetts Institute of Technology, explains: „We were exploring how to induce the insulator-to-metal transition in LCO with ultrashort pulses of laser radiation. At some point we found an extremely fast metallization along all the crystallographic axes of LCO, and the material suddenly reflected light at colors which were initially not reflected.“ A more careful analysis of the ultrafast snapshots then brought a surprise: “We saw interesting oscillations in the signal,” adds Baldini. “The crystal lattice was shaking at characteristic vibrational frequencies as LCO transformed into a metal and recovered back to its insulating state.”

Intrigued by their discovery, the experimentalists shared these findings with theorists in Hamburg. Thomas Brumme, then a postdoc in Hamburg and now at the University of Leipzig, together with MPSD Theory Director Angel Rubio, and Emmy Noether research group leader Michael Sentef, decided to first compute the relevant crystal lattice vibrations. With the experimental data and the computed vibrational modes, Sentef contacted the group at KCL, who are experts in computing electronic and optical spectra of complex materials. “We wanted to know what happens when the LCO crystal is deformed along the same vibrational coordinates for which the experimentalists saw the shaking in their movies”, says Sentef. “There had to be something special about those lattice vibrations.”

The results of the computational Gedankenexperiment were stunning. “We had expected that the lattice positions would have some influence on the electronic spectra”, says Cédric Weber, Senior Lecturer at KCL. “But we were surprised by how much the spectra changed when we looked at the displaced structures. In fact, for exactly the same vibrational modes observed in the experiments, LCO becomes metallic. The seemingly robust correlated insulating state is not as robust as researchers have thought for decades.”

These new insights highlight the role of the crystal lattice even in strongly correlated electron systems. They suggest that we may need to revisit our current understanding of these materials, where small deformations of the crystal have long been thought irrelevant. Rubio sees this not as a challenge in a story that is already riddled with complications, but as an opportunity: “Being able to change fundamental properties of exciting materials is a major driver for our research”, he says. “We are always looking for efficient ways to control superconductivity and other important features in materials. If we identify the right tuning knobs, they may be used in future quantum technologies.”

The Hamburg team is based at the Center for Free-Electron Laser Science (CFEL). Its members received support from the DFG’s Emmy-Noether program, the Hamburg Cluster of Excellence CUI : Advanced Imaging of Matter, the European Research Council, Grupos Consolidados and SFB925.