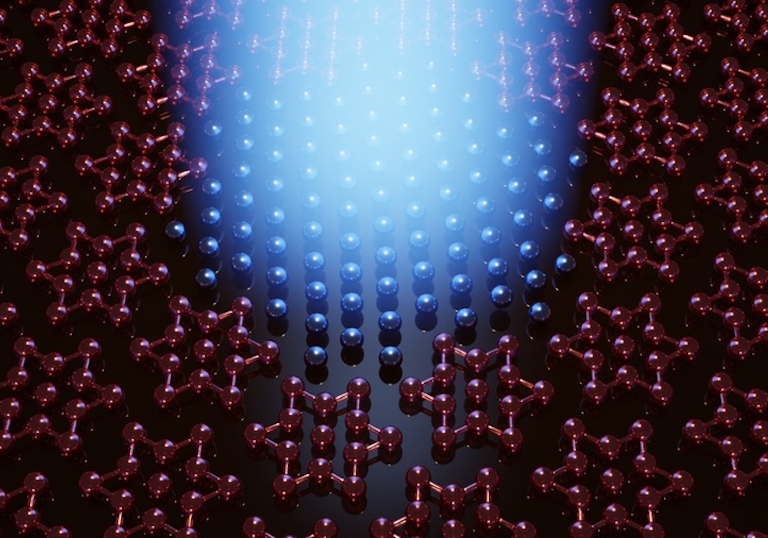 This illustration represents the light-induced collapse of the nanoscale charge order in a 2D crystal of tantalum disulfide (star-shapes) and the generation of a hidden metastable metallic state (spheres).

The development of high-speed strobe-flash photography in the 1960s by the late MIT professor Harold “Doc” Edgerton allowed us to visualize events too fast for the eye — a bullet piercing an apple, or a droplet hitting a pool of milk.
Now, by using a suite of advanced spectroscopic tools, scientists at MIT and University of Texas at Austin have for the first time captured snapshots of a light-induced metastable phase hidden from the equilibrium universe. By using single-shot spectroscopy techniques on a 2D crystal with nanoscale modulations of electron density, they were able to view this transition in real-time.
“With this work, we are showing the birth and evolution of a hidden quantum phase induced by an ultrashort laser pulse in an electronically modulated crystal,” says Frank Gao PhD ’22, co-lead author on a paper about the work who is currently a postdoc at UT Austin.
“Usually, shining lasers on materials is the same as heating them, but not in this case,” adds Zhuquan Zhang­­, co-lead author and current MIT graduate student in chemistry. “Here, irradiation of the crystal rearranges the electronic order, creating an entirely new phase different from the high-temperature one.”

A paper on this research was published today in Science Advances. The project was jointly coordinated by Keith A. Nelson, the Haslam and Dewey Professor of Chemistry at MIT, and by Edoardo Baldini, an assistant professor of physics at UT-Austin.

“Understanding the origin of such metastable quantum phases is important to address long-standing fundamental questions in nonequilibrium thermodynamics,” says Nelson.

“The key to this result was the development of a state-of-the-art laser method that can ‘make movies’ of irreversible processes in quantum materials with a time resolution of 100 femtoseconds.” adds Baldini.

The material, tantalum disulfide, consists of covalently bound layers of tantalum and sulfur atoms stacked loosely on top of one another. Below a critical temperature, the atoms and electrons of the material pattern into nanoscale “Star of David” structures — an unconventional distribution of electrons known as a “charge density wave.”

The formation of this new phase makes the material an insulator, but shining one single, intense light pulse pushes the material into a metastable hidden metal. “It is a transient quantum state frozen in time,” says Baldini. “People have observed this light-induced hidden phase before, but the ultrafast quantum processes behind its genesis were still unknown.”

Adds Nelson, “One of the key challenges is that observing an ultrafast transformation from one electronic order to one that may persist indefinitely is not practical with conventional time-resolved techniques.”

The researchers developed a unique method that involved splitting a single probe laser pulse into several hundred distinct probe pulses that all arrived at the sample at different times before and after switching was initiated by a separate, ultrafast excitation pulse. By measuring changes in each of these probe pulses after they were reflected from or transmitted through the sample and then stringing the measurement results together like individual frames, they could construct a movie that provides microscopic insights into the mechanisms through which transformations occur.

By capturing the dynamics of this complex phase transformation in a single-shot measurement, the authors demonstrated that the melting and the reordering of the charge density wave leads to the formation of the hidden state. Theoretical calculations by Zhiyuan Sun, a Harvard Quantum Institute postdoc, confirmed this interpretation.

While this study was carried out with one specific material, the researchers say the same methodology can now be used to study other exotic phenomena in quantum materials. This discovery may also help with the development of optoelectronic devices with on-demand photoresponses.

Support for this work was provided by the U.S. Department of Energy, Office of Basic Energy Sciences; the Gordon and Betty Moore Foundation EPiQS Initiative; and the Robert A. Welch Foundation.